The final part of my interview with Rebecca Barry, a producer of the Good Pitch² Australia 2014 film The Opposition. The film has been selected for the prestigious North American Hot Docs International Film Festival.  WATCH trailer below.

Rebecca is also a principal in Media Stockade—a company she founded with Madeleine Hetherton. Here, Rebecca talks about her experience with Good Pitch² Australia, a sale to National Geographic for I am a Girl, and a film that changed the way she views creatures other than human on this earth. For Part 1, click here and for Part 2, click here.

PB: After all you’ve learned, how does your company  Media Stockade work with Impact?

RB: Now it’s all about strategy and assessing change in different aspects: Living room change, community change, corporate change, professional change and political change. And the knowledge we’ve gained has now popped out as an offering we have to help other filmmakers and distributors: whether it’s helping people with strategies, campaign implementation and working to make it a win/win situation for filmmakers and outreach. A lot of what we do is focus on non-theatrical.

PJB: How’s I am a Girl travelling since it was released in 2013?

RB: There’s now a lot of films about gender inequality in the marketplace but I am a Girl screened at the UN in Geneva, the UN in Washington, UNESCO USA; AUSAID have screened it, DFAT have shown it in Israel, in Brazil; it’s been translated into Japanese. We’ve just had a big sale to Nat Geo so that has been the most successful financially.

PJB: That never would never have happened if you’d sold the film to television or a distributor who shoved it through the old routes, let it sit on a shelf and then parked it in a library to be sold en masse somewhere in the transactional future. Do you think the impact strategy led to Nat Geo’s interest in the film?

RB: Absolutely. And now it will have another life because Nat Geo has bought world rights.

PJB: Congratulations. That’s huge. To Call Me Dad and The Opposition… What happened when Good Pitch² Australia came on the scene?

RB: We had connected with directors Sophie Wiesner and Hollie Fifer who had recently graduated from AFTRS. We admired them as filmmakers and really engaged with their ideas and films (early stages of Call Me Dad and The Opposition); when Good Pitch² Australia opened its doors—we applied, and hoped, but didn’t think both films would get in.

PJB: Did you know what Good Pitch² Australia was about when you applied?

RB: We were really excited but because it was the first year but we didn’t know how it worked. It was perfect timing for us because it helped us refine our work and our process. It’s all fed into each other: Good Pitch, DAF, The Surgery Ship, I’m a Girl—learning from those experiences.

PJB: So Call Me Dad premièred on ABC 1 in prime time during White Ribbon Week drawing national attention to domestic violence, in concert with Hitting Home—to great impact. It was really something to see the Royal Commission into Family Violence delivered to parliament last week.  Judging from the high level of media coverage and raising of awareness in the community, led by extraordinary women like Rosie Batty—we get a sense that our society has had a wake up call, and an issue which hasn’t had the meaningful attention it should have had, is finally being taken seriously. Of course, actual change is something else but Call Me Dad continues to contribute to that shift not only in awareness but how to engage with men and give them a way forward. 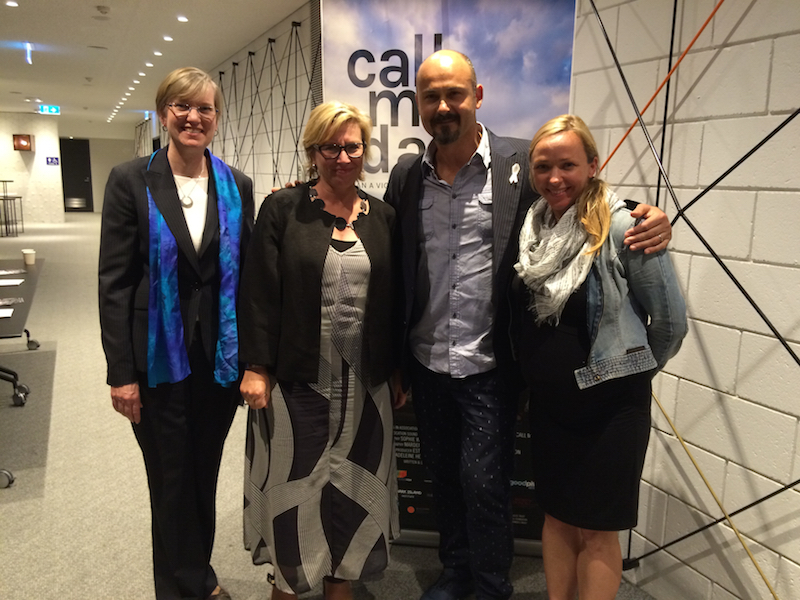 Sophie Weisner (R), director of Call Me Dad with Rosie Batty and others.

What’s your focus with The Opposition’s release?

PJB: And Britdoc,  (Virunga, Citizen 4, The Look of Silence) via Good Pitch² Australia, is involved with The Opposition aren’t they?

PJB: Some of the other filmmakers who’ve been selected for Good Pitch² Australia have said to me: “Suddenly ideas for films we thought were not possible suddenly become possible”.

The reasons ranged from: broadcasters aren’t commissioning that type of film (certainly not feature length documentaries), or they couldn’t raise all the money, to: we won’t have enough funds for outreach with what’s available. So it’s also about supporting films that filmmakers want passionately to make. And when you’re in the room on the day, it’s obvious that Good Pitch provides the opportunity to marshal all forces; there’s a momentum which is, as every filmmaker knows, key to a film’s realisation.

RB: Being able to resource the impact campaign—who would pay for that? We’re just so thankful for that experience. Good Pitch² Australia helped us to refine our value system and focus our work, search out the types of projects we want to get involved in, and highlight our strengths. We love our work and we’re good at it—it’s really satisfying seeing a film fulfil its potential.

PJB: Who else funds impact and outreach?

RB: DAF (Documentary Australia Foundation) does.  You apply and have to find partners and that possibility is there but Good Pitch² Australia is like DAF on steroids: they zone in on building a coalition of partners and showing how it’s done as well. There’s a level of professionalism that’s needed at this level.

PJB: How did you find that first retreat at Kangaroo Valley?

RB: It was confronting in many respects—

RB: We wanted to succeed and there’s a lot of work to do so you can deliver on the Good Pitch day. It’s intense…The first weekend was so collegial; the vibe that was created by Ian and Malinda, and the Shark Island Institute people—being encased in that positivity, optimism and… gooey support. We weren’t used to it, we thought: What the hell is going on? We were a bit confused.

PJB: (Laughs). Must have come as quite a shock… But those weekends are tough and a lot of work too. Being on the other side and watching everyone rise to such a high standard—it was inspiring to witness how radical the improvement, in all the individual pitches, from day one to day three over that second weekend. (See Pitch Perfect). There is technique, it’s not just a case of standing up and talking about your idea. Those pitches are honed and compelling.

RB: When I was there for the first time,  it was a moment in my career where I thought: This is where I want to be with my work. Collectively, it’s an incredible brain trust. Malinda‘s background—her knowledge and skills! And then working with Jess and Beadie from Britdoc, our EPs on The Opposition, they demand nothing less than excellence and say, “This is an international film, push it—aim high.”

PJB: That doesn’t happen nearly enough—especially in Australia. You need support but you also need constructive, smart and insightful criticism from people with knowledge, and a filmmaker who responds, to create excellence. It’s easy to flatter and praise, and ignore critique but it isn’t much isn’t good for the developing work or filmmakers… Or the culture at large.

RB: Both Hollie (director of The Opposition) and Sophie (director of Call Me Dad) are very receptive to feedback. We don’t have to filter. It’s not always like that, of course. I think they, and me and Madeleine, got that from AFTRS—that level of scrutiny and critique, you have to let the ego go and say: “Come and get it.”

PJB: That’s the way to make a better film…Sadly, I have to bring our chat to an end…. But I before we go, can you tell me about a film that has impacted you?

RB: From a creative standpoint, it’s Errol Morris’s Thin Blue Line but a film that moved me, and changed me, was Black Fish. It’s a film about the performing Orca killer whales at Seaworld and the dire consequences of capture and captivity, when splitting the whales up from their families and leaving them to live long lives in confined spaces.  It devastated me to understand that other creatures—I call them ‘earthlings’—on this planet have families, communicate, have feelings. I never understood it. Seeing the bottom up and top down impact that film has—

PJB: What was that?

RB: The bottom up impact was that it harnessed the audience to action—petitioning, protesting, holding up signs in front of Sea World to a point where they had to react. Their share price fell and they had to change their business model around how they treat animals. That film really rattled me—it changed how I eat; I became an ethical meat eater; I tried going completely vegan and vegetarian but I went slightly bonkers.

PJB: I hear you. I’m an ethical carnivore (if there is such a thing). Even though I eat much less meat than I used to and I’m careful about investigating the life it had before it sat on my plate, it’s hard to give up.  It’s pathetic of me to admit this but true: I’m not good without meat protein—

Postscript, Black Fish: In 2015, primatologist  Jane Goodall said that Seaworld should be shut down. “It’s not only that they’re really big, highly intelligent and social animals so that the capture and confinement in itself is cruel,” she said of the captive orcas, but also that “they have emotions like ours.”

See this article in The Conversation (UK) written by David Hickman about the success of Black Fish as an example of the social change a documentary can achieve.

Photo in header: Joe Moses in The Opposition.  Courtesy of Media Stockade