The pitch. It can go badly or it can go the good pitch way.

After the first public screening of Call Me Dad, and prior to its television broadcast version on the ABC in November 2015, Adair Donaldson from Shine Lawyers and moderator for the Q&A, told a story that applies to every Good Pitch² Australia film: how the director Sophie Wiesner, together with producer Madeleine Hetherton, had only seven minutes to convince the Good Pitch audience why this film should be supported.

What everyone knows who has been in the room when a pitch (with film trailer) runs longer than seven minutes—it’s too long. You don’t get a second chance but that’s true in the marketplace as well. Just getting a meeting is hard when you’re a filmmaker, and at GoodPitch² Australia you’re pitching to a room full of broadcasters, donors and partners, all at once.

You don’t want to blow it. And blowing the pitch is blowing it.

I was there the day the Call Me Dad team pitched at the Good Pitch² Australia 2014 event: they told a moving story which is controversial within the subject of domestic violence—men’s behavioural change programs. The filmmakers took care of the complexity effortlessly, not a sweat bullet in sight. As we know, most complicated things that look easy aren’t easy at all: it takes time, work, practice and, ideally, advice from people who know what they’re doing to be that good. They’d been coached—that much was clear. 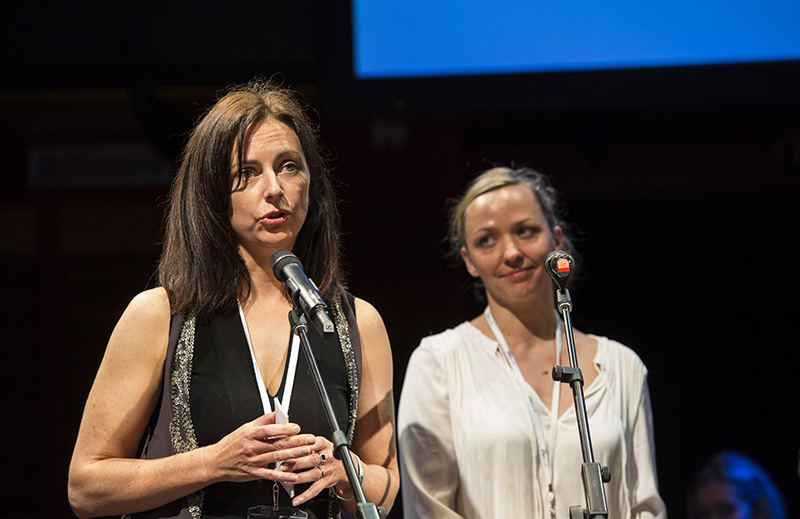 As a producer, writer and executive, I’ve done my time in the trenches battling the tricky territory of art, commerce and creative control. I’ve been on the receiving end of plenty of pitches and it’s true to say that on that side, we’re all critics, and relaxed. I’ve also pitched countless projects and I’m no natural. Having not a scintilla of the showgirl in me, pitching warps performance anxiety to a whole other tenor—that’s the sweating bullets side. By trial and error, it can take a while to get right; and then there’s being coached by the best. I know which one I would have preferred if I had my time over. (I did it the trial and error way—way too much dry retching involved).

I’ve also seen what happens when storytellers inexperienced at pitching, and clueless event producers, miss the point and it’s not pretty.

A couple of years ago, I attended a Storytelling Masterclass given by  American producers who are, without a doubt, among the best at what they do worldwide. They had traveled far distances to share their knowledge and tell us how they do what they do so well. (I’m not identifying them, the event or the medium because it would embarrass everyone and that’s not the goal here). The Americans were also participating in the event to hear selected pitches from Australian storytellers with a view to acquiring a pitch.

They rocked, we absolutely did not rock. I almost chewed my index finger off watching my well-intentioned, selected, fellow Australians—way off the mark in every conceivable way—pitch. A writer who knew what’s what, leaned over as I hit bone and said “F—- me, they haven’t been coached.” Our American guests, listening to the pitches, were flawlessly polite, but clearly didn’t know where to begin in response, except to say, subtextually: Don’t give up your day job. Ever. I doubt the pitchers (bar one who got close but didn’t quite nail the broader context) had any idea they needed help. To let people loose when all the examples were there to get it right? I blew a thousand vessels. It was a neon missed opportunity—for the unguided pitchers.

Australia is not a ‘pitch culture’. Not the way America is. I gawp at the articulateness of Americans, how good they are at talking, and expressing themselves: I see a five-year-old vox popped in an urban wasteland devoid of any kind of privilege and she’s speaking in complete sentences with a clarity some of our politicians haven’t yet mastered. She has a ‘voice’ and knows how to use it. If you’ve grown up here, you’d be familiar with the idea that we are more comfortable looking like we’re not trying hard, keeping the gab to a minimum and hiding how much we care—all for fear of being branded a wanker.

This is misguided and unhelpful when it comes to pitching projects because why would anyone care if you don’t? And yet, caring isn’t enough – you have to coolly construct arguments that work and keep the end-game in focus at all times which means being alert to the priorities of those you are pitching to. It’s about building partnerships and no-one does it alone; that is fundamental to filmmaking but it’s equally true about fostering change.

Documentaries—and especially social impact documentaries—are not the same animal as fiction feature films but these days, I suspect, they have to be as good or better than features. The bar is high. And funding is tight but that’s nothing new; most doco makers have other jobs so they can live and pay rent because it’s very rare to make a living from documentaries.

Described as “labors of love” (code for: don’t expect to be paid much for your work), the only way to justify that amount of unpaid labor, is the love part. Personally, I don’t think that’s right and we, the viewing audience, are missing out but it’s mostly the way it is.

The filmmakers making the personal documentaries supported by Good Pitch make them because they can’t not make them. That usually goes under the worn out word “passion”—they want to tell these stories, and well. It’s a reason to listen. It’s not only about the films, but in the Good Pitch model, without them, there is no jumping off point for the social impact campaign.

Why we need, and want, good documentaries.

A pitch is the sell, but it’s for a film and the filmmakers who have something to say are what Good Pitch is about. As our interaction with each other, and the world beyond our immediate lives, is increasingly mediated by the virtual, we seem to hunger for the real and truthful experiences of other humans and creatures. Tweets aren’t going to do it, nor will image-feeds, partisan and light-on newspaper articles, or too much information (about everything) that piles into white noise and leaves us feeling if not hopeless and a tad depressed, then a passive consumer.

We’ve always needed storytellers to join the dots for us but with the onslaught of social media, the vagaries of the digital era and the global decline in financing investigative journalism, distraction and superficial readings of what goes on has become a norm—and we need smartly-told stories more than ever.

Films have always been about making the invisible visible, and in narrative form it remains unlike any other medium. When we sit quietly in the dark—we can see and hear what’s being said, we relate emotionally and if the film is successful, we engage with the ideas underlying the story. Then, we can make up our own minds. When we do that, we think outside the singular experience—we want to talk about it or do something or reach out. And what was a unique experience on film becomes a catalyst for change.